As the Sustainability Coordinator at Portland Community College’s Rock Creek Campus over the last seven years I have had numerous neighborhood First Lego League teams come to campus to tour our sustainability practices for ideas.  First Lego League is a global robotics competition that teaches young children Science, Technology, Engineering, & Math (STEM) concepts through hands-on experiences and learning. The competition is built around yearly theme-based challenges that engage children in research, problem-solving, coding, and engineering. City Shaper was this year’s project theme, which intended to have students observe how cities and buildings grow, thrive, and change. The teams compete on three core activities: robot missions built through Lego pieces, a project that can have a sustainable impact and demonstration of core values.

Last fall when the Universe Changers Team contacted me I was thrilled to see they were all girls with mostly “super moms” as coaches!  We had a fun tour of campus where I showed them our solid waste, recycling and composting systems, along with the farm, apiary, solar array, and learning garden.  They also talked with a Portland city planner and someone from Waste Management. In the end the team decided the objective for their City Shaper project would be, What can we do to make trash cans more environmentally friendly and efficient? 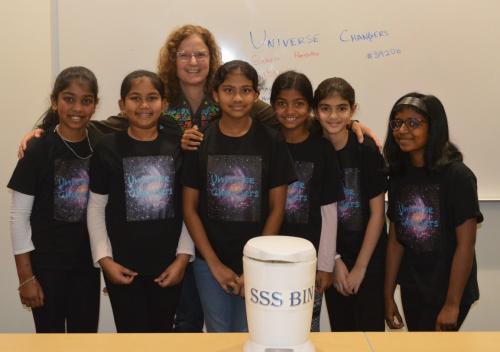 Universe Changers Team:Anusha, Sahana, Harshitha, Anjali, Shreya, and Nivedha with Elaine after they presented their prototype before the state competition.​

The team built a prototype called a Triple-S Bin (Safe, Smart, and Secure) that; 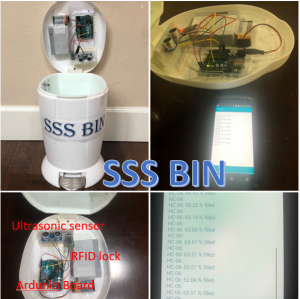 Triple SSS bin prototype bin with the ultrasonic sensor and Bluetooth sensor integrated onto an Arduino board.

The team came back to PCC after the New Year to present their prototype and share with me their experience at their first competition which they won.  As they talked through their design I scribbled questions for them about the design, consideration for further research and how to make the bin more educational and user friendly.  I was impressed because they were open to my feedback but had also thought through many of the challenges I posed to them.  I encouraged them to look at DEQ’s Materials Management in Oregon 2050 document, collect some observation data on how people interact with the bin and clearly articulate the environmental and financial benefits to the judges.  The 4th and 5th graders had follow up questions for me and in the end I felt like I was interacting in a seminar class with high school students!

The Universe Changers are off to the Intel Oregon First Lego League Championship on January 19, 2020 at Liberty High School in Hillsboro.  With their thoughtfully designed smart bin, research, professionalism and polished presentation skills, they are sure to be one of the most competitive teams.  They are already winners in my mind.