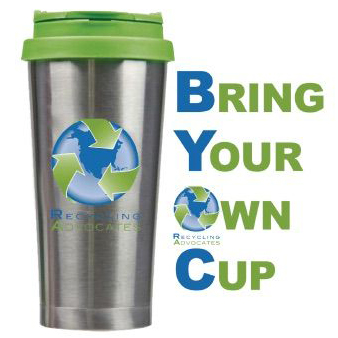 Recycling Advocates (RA) has launched a new awareness campaign in local coffee shops called Bring Your Own Cup, aimed at reducing the number of single-use (disposable) coffee cups sent to landfills from the Portland Metro area.

By simply reminding Portland’s coffee-loving public they can bring their own cup to a favorite coffee shop, RA hopes to influence a change in behavior that could result in a major decrease in the amount of waste generated by single-use cups.

Recycling Advocates estimates that 50 million disposable coffee cups are used in the Metro area per year, equal to 3 million pounds of solid waste generated and 6,000 metric tons of C02 generated.

Recycling Advocates Board President, Brion Hurley, explains the history of the campaign: “We chose this campaign due to the popularity of coffee in Portland, and the confusion over the lack of recycling options available for disposable coffee cups. This is a simple problem that we can solve as a community. We have some of the most eco-friendly citizens and businesses, and they care about the impact they are having on the environment.”

The campaign is designed to educate baristas and their customers about the waste cycle of to-go beverage cups - which are excluded from Metro’s curbside recycling program due to plastic added into the cups to handle hot temperatures. Additionally, iced drink cups, lids, and straws, along with hot cup lids (due to their size and shape) cannot be recycled curbside. Brion Hurley notes: “We hope that customers will learn they have options when buying beverages to-go, and that the Bring Your Own Cup campaign can also help local shops keep costs down.”

With the assistance of RA volunteers, participating coffee shops are brought on board with in-store signage and ‘talking points’ for baristas. Store owners/managers are asked to track their disposable cup inventory and monitor the number of beverages served in personal cups. Additionally, RA offers suggestions to shop owners for incentive programs and tips for promoting in-store durables or ‘stay here’ coffee cups. RA seeks to boost participating businesses by promoting shops on the RA social media network, website, and newsletters. Through volunteer surveys, RA found that many coffee shops in the region have been independently acting on this initiative, so RA set up a rating system to bring awareness to local coffee shops that are setting the standard for reducing disposable coffee cup usage. RA volunteers will continue to compile data from participating shops through the summer, and report on the program at their annual meeting in September and on their website. Metrics and feedback from shop owners, baristas, and customers will help initiate a larger roll out across the metro area next year.

A ‘Take the Pledge’ sign-up is also located online for individuals to commit to reducing disposable coffee cup usage.

Brion Hurley explains that Bring Your Own Cup is aligned with the mission of the organization. “RA believes grassroots action can bring about change, and BYOC is one small thing people can achieve to make an environmental impact,” states Hurley. “From experience, we know that many small, community-oriented coffee shop owners are eager to participate and are readily open to influencing change behavior amongst their customers.”

Nectar Cafe, located in the Hollywood district in NE Portland, was the first shop to sign on to the campaign last fall, and is already seeing good results. “The partnership between Nectar Cafe and Recycling Advocates started with marketing materials that sparked discussions between our baristas and customers,” states Nectar Cafe owner Natasha Stille. “We regularly hear that people had no idea to-go cups were not recyclable. It’s been a total eye opener. These discussions have led us to launch our ‘reusable jar for a deposit’ program, and we’re excited to track the results!”

Papaccino’s Coffee & Tea on SE Woodstock reports customers either chose ‘stay here’ cups or brought their own cups on 50% of hot drink purchases after a few months of participating in the campaign.

For now, Bring Your Own Cup has a goal to include a total of 25 shops in the Metro area by the end of 2017. Any coffee shop or volunteer interested in participating in the campaign is encouraged to contact Recycling Advocates at adrienne@recyclingadvocates.org or learn more about the campaign at http://www.RecyclingAdvocates.org/single-use-coffee-cup-reduction